The Activator Advantage – May 2017 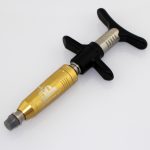 (PHOENIX) – Activator Methods International® (AMI), the industry leading creator of the world’s most widely-used chiropractic instrument adjusting method, is pleased to announce the release of a special commemorative version of its highly popular Activator IV and Activator IV EZ Grip adjusting instruments. These exclusive, limited-edition instruments have been created to honor the landmark 50th Anniversary of The Activator Method.

Fifty years ago, back in 1967, Dr. Arlan W. Fuhr was a young chiropractor in pain. After long days adjusting patients using the Van Rumpt technique, he found himself soaking his arms in ice to relieve intense discomfort caused by snapping his elbows together to produce the force needed to adjust his patients. He set his sights on solving that problem. The result was the Activator Method of chiropractic adjusting, along with the very first Activator Instrument.

“I love our profession,” said Dr. Fuhr. “So, the driving force for me, at least at the beginning, was to find a way to stay in practice without destroying my own body in the process.”

What Dr. Fuhr couldn’t have predicted was the astounding success of the invention. In the 50 years that followed his initial insight, Activator has become the gold standard of instrument adjusting and is used daily by more than 70% of chiropractors worldwide.

Patients often specifically ask for Activator adjustments because the technique is safe and doesn’t require twisting motions or manual force to complete adjustments, particularly of the neck. The instrument and method have been the subject of 23 clinical trials and more than 150 scientifically reviewed papers supporting its safety and effectiveness.

The Activator Method is part of the core curriculum in 18 colleges of chiropractic in the United States, as well as in 31 colleges and universities overseas. Every year, Activator presents dozens of training seminars in the U.S. and overseas, and offers its self-paced Basic Scan Protocol via the web through its Activator Online course.

Dr. Fuhr said, “As we look back now, we can see the impact of Activator is at least threefold: First, it helps the doctor preserve his own body, which is his primary and most important piece of equipment. Second, many more women are now our colleagues in this profession, at least in part because our instruments are a great equalizer. A person of smaller stature can deliver precisely the same adjustment as any other properly trained Activator doctor. Third, the instruments and technique make it possible for doctors to build a profitable, sustainable practice because they can see so many more patients and treat them consistently, safely and with great results.”

Only a small number of the 50th Anniversary instruments have been produced and offered for sale. There will not be a second manufacturing run, making the instruments truly collectible.