Effects of a Manually Assisted Mechanical Force on Cutaneous Temperature

Sixty-six healthy subjects (36 women and 30 men) without acute low back conditions or symptoms were recruited. Subjects were randomly divided into 2 groups based on the length of the acclimatization period (8 or 30 minutes; TRP(8) and TRP(30), respectively). In turn, each recording period group was divided into 3 subgroups (n = 11 per subgroup): treatment, sham, and control subgroups. Bilateral DIST was conducted at L-4 (TRP(30)) and L-5 (TRP(8)) using infrared cameras (Subluxation Station Insight 7000; Chiropractic Leadership Alliance, Mahwah, NJ).

Before treatment (t(-0.5)), the TRP(8) CT was significantly different between the ipsilateral and the contralateral sides for all subgroups. At 10 minutes (t(10)) after intervention, CT increased significantly (P < .05) for the treatment group but not for the sham and control groups. In contrast, there were no significant differences in the TRP(30) CT before treatment between the ipsilateral and the contralateral sides; but at t(10), CT was significantly (P < .05) greater for all 3 subgroups compared with preintervention CT.

Clinical reports and research studies have documented the behavior of chronic low back and neck pain patients. A few hypotheses have attempted to explain these varied clinical and research findings. A new hypothesis, based upon the concept that subfailure injuries of ligaments (spinal ligaments, disc annulus and facet capsules) may cause chronic back pain due to muscle control dysfunction, is presented. The hypothesis has the following sequential steps. Single trauma or cumulative microtrauma causes subfailure injuries of the ligaments and embedded mechanoreceptors. The injured mechanoreceptors generate corrupted transducer signals, which lead to corrupted muscle response pattern produced by the neuromuscular control unit. Muscle coordination and individual muscle force characteristics, i.e. onset, magnitude, and shut-off, are disrupted. This results in abnormal stresses and strains in the ligaments, mechanoreceptors and muscles, and excessive loading of the facet joints. Due to inherently poor healing of spinal ligaments, accelerated degeneration of disc and facet joints may occur. The abnormal conditions may persist, and, over time, may lead to chronic back pain via inflammation of neural tissues. The hypothesis explains many of the clinical observations and research findings about the back pain patients. The hypothesis may help in a better understanding of chronic low back and neck pain patients, and in improved clinical management. 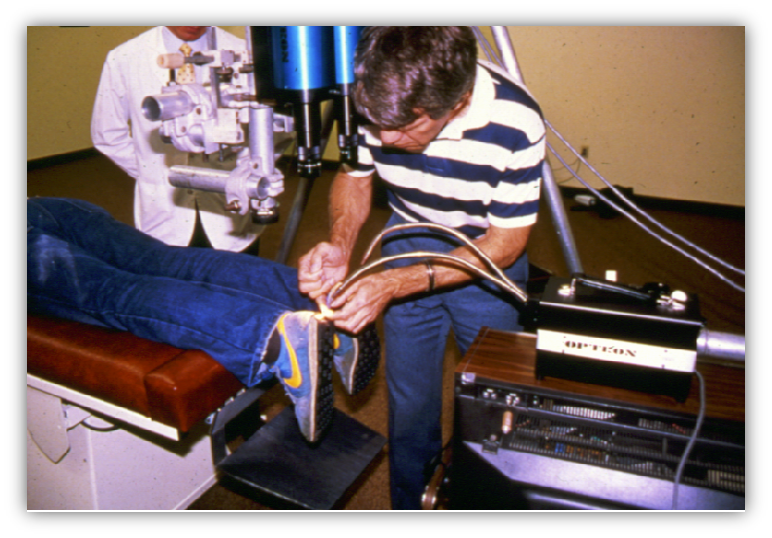 a) Establish a precise, standardized method to assess prone leg alignment changes (functional “leg length inequality”), which have, until now, been reported clinically to occur as a result putative chiropractic subluxation isolation tests [neck flexion (C5) and extension (C1)]; and b) describe differences in leg alignment changes in a group of healthy subjects and patients with chronic spinal complaints.

Heel position movement occurred during trials and were highly individualistic. Patients exhibited more asymmetrical movements than the controls during the head-up trials. No differences existed between controls and patients for range of heel displacement or net displacement.

The results of this study allow the following to be concluded: 1) small leg displacements (< 1 mm) were recorded by the optoelectric measurement system; 2) heel position changes during isolation tests were identifiable; 3) as a result of head-up maneuvers, patients exhibited more asymmetrical heel movement than controls (t = 8.743, p < .01); 4) The heel range of motion was not different between the groups; and 5) The net change in heel position was not different between the groups. Patients exhibited more asymmetrical heel motion during head-up isolation tests, suggesting that some phenomena may separate these two groups, warranting future study.

A reliability study was conducted to determine whether prone leg length analysis in association with an isolation test maneuver was reproducible. Seventy-two subjects were evaluated by two examiners on separate occasions for the presence of C1 subluxation. Concordance was assessed by the Kappa statistic, and interexaminer percentage of agreement was compared. Agreement beyond chance for the two groups was K = 0.52, p less than 0.01 and 0.55, p less than 0.001, respectively. The results indicate good reliability using this method of analysis for putative upper cervical subluxation in this patient population. Further investigation is necessary to correlate this method of analysis with the empirical evidence of manipulable lesions or subluxations.