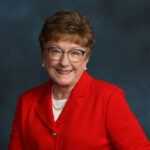 A groundbreaking business and civic leader, Judith J. Fuhr is the Chief Executive Officer for Activator Methods International. Judi has, since 2000, been at the helm of the company’s day-to-day operations as Activator’s Vice President, Chief Operating Officer, President and co-owner.

Judi Fuhr also has a long track record of community service. She was a member of the Chandler School Board for eight years, serving five of those years as the Board’s President. In 2009, Judi was honored by the Chandler Education Foundation, presented with the organization’s “Woman of Greatness Award.”

Judi joined Chandler Regional Hospital’s Board of Directors in 1990. Her tenure including two years as the Board’s Vice President. She was also a member of the West Valley Fine Arts Board.

A proud native Arizonan, Judi Fuhr was born and raised in Chandler, Arizona. A personal highlight came during her time as President of Arizona Women in Agriculture. She was called upon to represent Arizona agriculture concerns in Washington , D.C ., and to testify before then-Secretary of Agriculture John Block.

Judi is one of the few women in the United States to hold the titles of Honorary Chapter Farmer, Honorary State Farmer and Honorary American Farmer with the Future Farmers of America.
The titles are termed ‘honorary ‘ because they were given before girls were allowed to fully participate in FFA.